TheMojifier is a Twitter bot which replaces peoples faces in images with emojis matching their emotion, like so:

To use it reply to any tweet containing a picture (of a person) with the hashtag #mojify, like so: 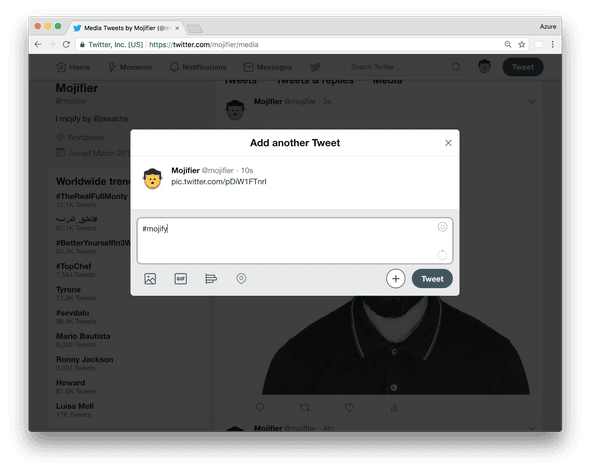 In this article I’m going to explain how TheMojifier was made and show you how to create your own Twitter bot.

All the code for Mojifier is available on GitHub, and you can follow TheMojifier ™ on Twitter at @mojifier.

I’d like to thank Osama Jandali for creating the logo and all the artwork 😀 for TheMojifer as well as helping out with coding the Azure Functions.

To build the mojifier, we need to use several Azure services.

Ok first things first, you need an accout on Azure. If you don’t already have one then you can signup and get a free years worth of services by following this link.

This service enables you to create complex business logic for your app without writing any code by using a visual designer. It comes with a rich library of connectors like twitter and slack as well as a limited set of control flow statements such as if, switch etc…Think of it as a more expressive and customisable version of Zapier or IFTT

As powerful as Logic Apps are sometimes you need to write business logic using the full expressiveness of a programming language. Azure Functions is a technology that lets you host snippets of code that can respond to events or HTTP requests, Azure handles all of the scaling issues for you and you only pay for what you use.

To prevent abuse and stay under Twitter API limits the mojifier throttles users to one request every few minutes.

To do that we need to store state between runs, however both Logic Apps and Functions are stateless, the state of the previous run is not available in the next, so there is no way to know how long ago the user last triggered a mojify.

So we need to store state in something external, we chose REDIS.

Before we delve too deep into the implementations let’s first answer some higher level questions.

How to calculate the emotion of a face?

Calculating emotion is one of the easiest parts of the application. We use the FaceAPI, part of the Azure Cognitive Services offering.

Take for instance this image: 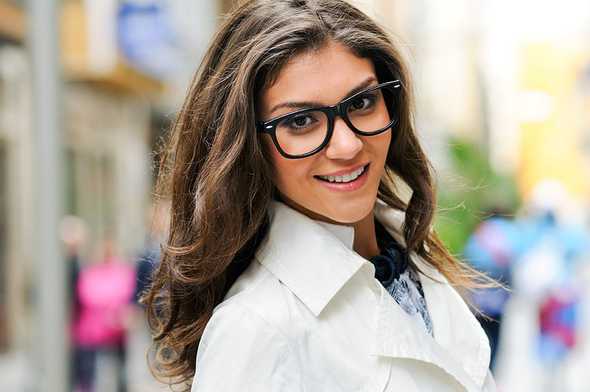 We provide the image in the body like so:

The API by default doesn’t return the emotion, you need to explicitly specify the query param returnFaceAttributes=emotion

The API is authenticated by the use of a secret key; we need to send this key with the header

The API with the query params above would return a JSON like so:

It returns an array of results, one per face detected in the image. For each face, it returns the size/location of the face as faceRectangle and the emotions represented as a number from 0 to 1 as faceAttributes.

You can start playing around with Cognitive Services even without having an Azure account, simply go to this page and enter your email address to get trial access.

How to map an emotion to an emoji?

Imagine there were only two emotions, fear and happiness, with values ranging from 0 to 1. Then every face could be plotted in a 2D emotional space based on the emotion of the user, like so: 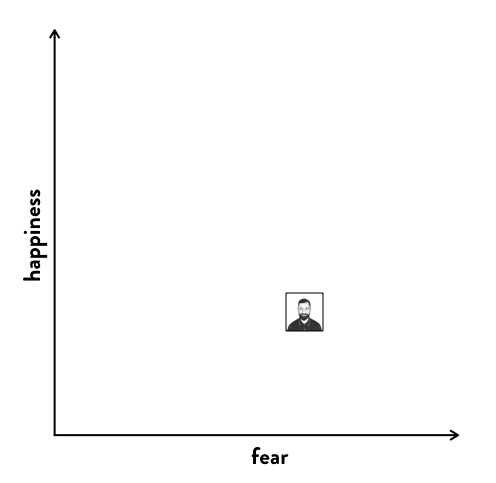 Imagine then that we also figured out the emotional point for each emoji, and plotted those on the 2D emotional space as well. Then if we calculate the distance between your face and all the other emojis in this 2D emotional space we can figure out the closest emoji to your emotion, like so: 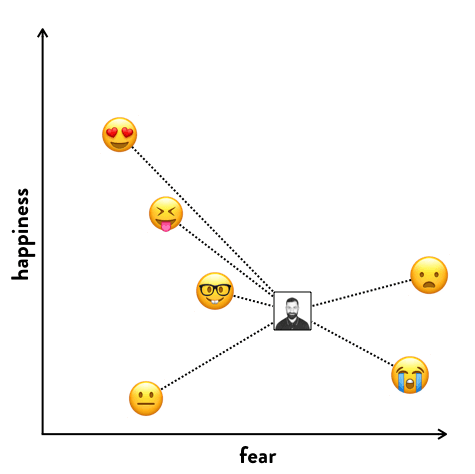 This calculation is called the euclidian distance, and this is precisely what we used but not in 2D emotional space, in an 8D emotional space with (anger, contempt, disgust, fear, happiness, neutral, sadness, surprise).

How to calculate the emotional point for all the emojis?

We can’t pass an image of the emoji to the emotion API to get it’s emotion because, well because it’s not human. So for each emoji, I needed a human proxy, me.

I took pictures of myself accurately mimicking each emoji, and used the emotional point for that image as the proxy for the emoji. To keep things interesting I also chose people from my team and associated them with emojis as well, like so:

For the emoji of love eyes (😍) I chose a picture of my wife ❤️. In memory of Stephen Hawking I picked a picture of him to represent 🤔, and there are a few other easter egg emojis as well, such as 🦄 and 💩 that have been proxied using different mages.

How to create a composite image with the emoji?

At this point in the flow of the application we know:

So for each face discovered in the image, we need to layer an emoji over the face, resizing the emoji to fit the face.

To implement this functionality, I used the open source image manipulation library Jimp.

The full source code for this feature can be found in the function createMojifiedImage this file.

In the function, we load the source image into Jimp like so

We later on load the image of the emoji like so:

We then resize the emoji so it will fit the size of this persons’ face, like so:

Then we composite the emojiImage over the sourceImage at the right location (the face), like so:

The best way to understand how the mojifier works is by understanding the Logic App that orchestrates the whole flow. 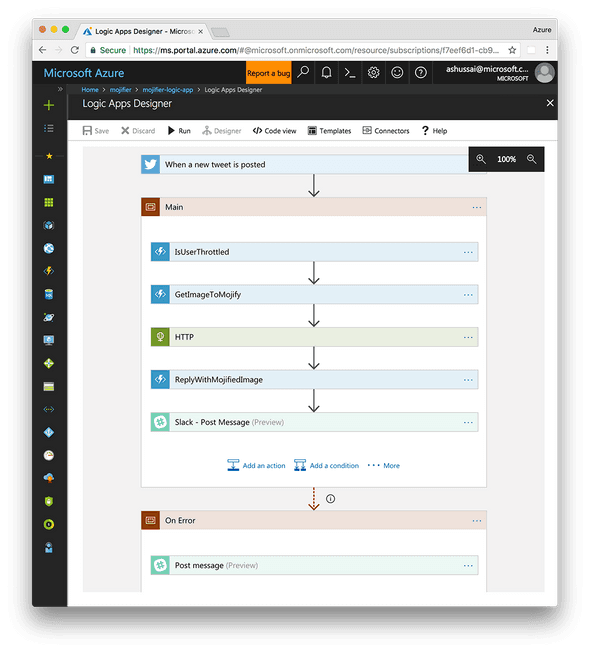 Logic Apps start with a trigger, something that will start a flow. We want to start our flow when a tweet arrives, so we use the Twitter connector. The twitter connector requires that we login using a twitter account, once setup we can configure it to trigger everytime someone posts the hashtag #mojify, like so:

The next connector in the flow is a custom function, our throttling function. This connector is an Azure Function with an HTTP trigger so theoretically we could add an HTTP connector and have the Logic App POST to it. But Azure Functions are connectors in their own right in Logic Apps so can be searched for and added just like the twitter connector above. 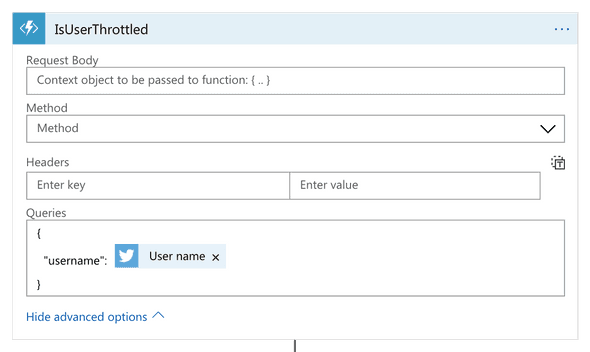 You can see the full code for the IsUserThrottled function here.

With Logic Apps we can pass outputs from past steps as inputs in future steps, these are called dynamic values. In this step, we are passing to our IsUserThrottled Azure Function the username of the person who wrote the original tweet. When you click in any field that accepts a dynamic value, a popup box appears with a list of available values, like so: 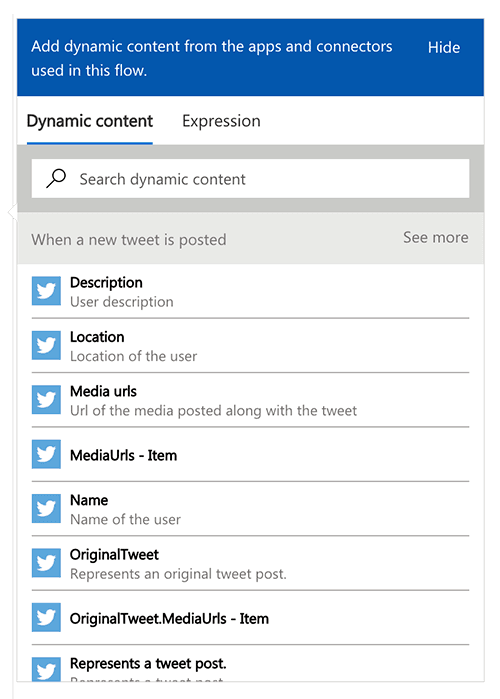 Returning a 429 status code, which means the request timed out, will cause Logic Apps to try to auto-retry the request. That’s not the functionality we want, we want the flow to exit, so we return a 400 if the user is throttled or a 200 if they are not throttled.

We don’t want to make our Azure Functions open to the world, so we secure them with the function level auth. This would normally mean that to trigger the function you’d have to pass in an auth key in the request, usually in the header. 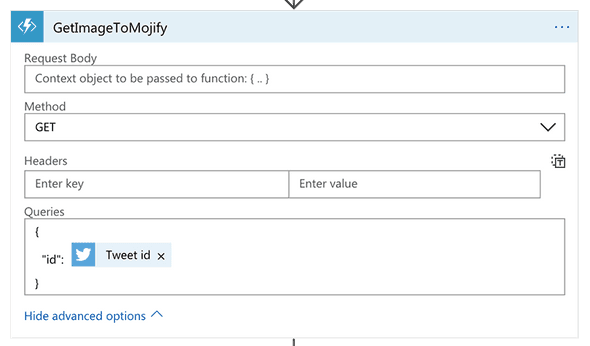 You can check out the full code for this function here. 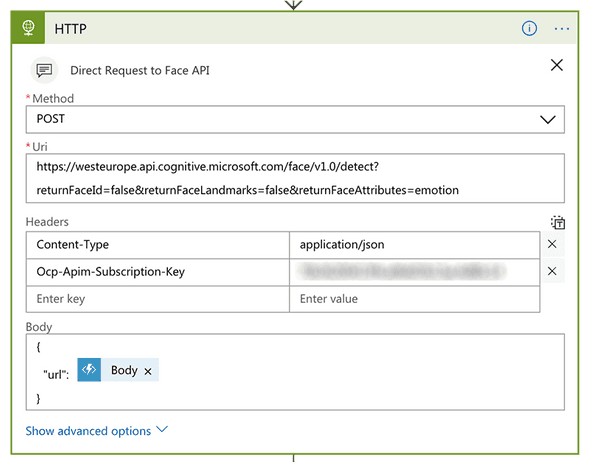 Cognitive Services and the FaceAPI are first class citizens in Logic Apps and as such can be added just like any other connector.

However at the time of writing the FaceAPI when used within Logic Apps doesn’t return any emotion information, that requires some individual query params.

So for now, we will call the API using a raw HTTP connector, passing in the URL with the required query params to trigger emotion detection and also by adding in the security key.

ReplyWithMojifedImage is the primary function in our app; we pass in data about the original tweet and the FaceAPI, it’s responsible for:

We’ve already covered at a high level how we calculate an emoji for each face and how we create a composite image with the emojis layered over the faces. 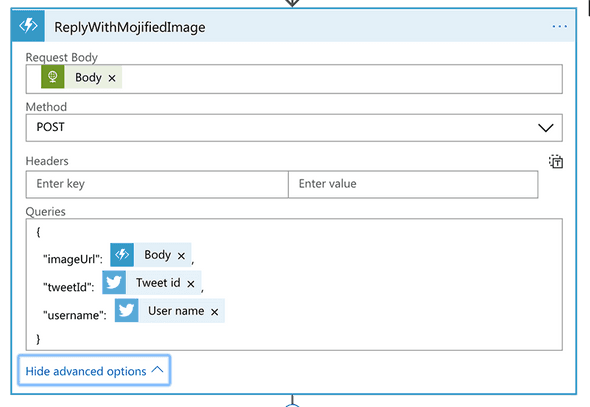 This function takes as input in the request body the output JSON from the FaceAPI call, and it also takes as query params the original image URL and information about the tweet itself.

The full source code for this function is here.

Posting to Slack on success

Finally, I want a notification everytime the mojifier runs, so I added a slack connector.

You will first need to authenticate with slack and then choose the channel where you want to post.

Then just like other actions you can use the outputs from previous steps as the inputs to this step. Since it’s slack, we can also use a slack notation for emoji in the message itself.

The above configuration results in the below message posted in slack. 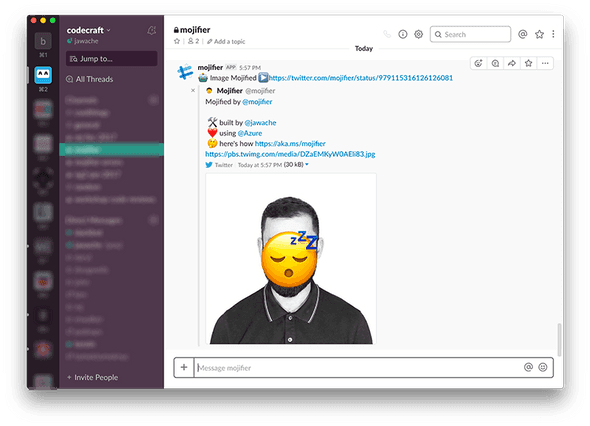 Posting to Slack on error 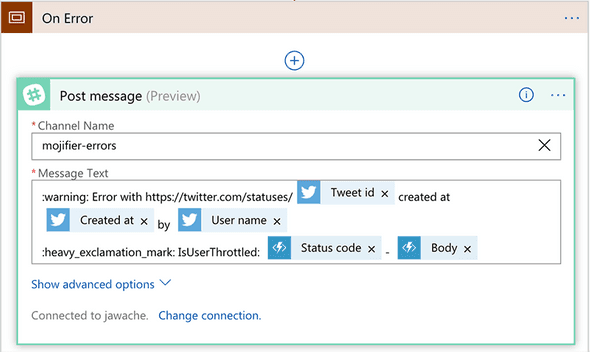 This is slightly more complex since any step in the flow can error out or be skipped.

But there is an easy way to handle this kind of issue in Logic Apps with the use of scopes.

We can use that with the run after config to trigger a step if any of the previous steps have failed.

I’ve created two scopes in this app, main and on error. You can configure either a step or a scope to run after previous steps or scopes.

I’ve set this up to post another message to another slack channel if any of the steps in the flow fails.

Our application, specifically the Azure Functions in our app, need some configuration to run.

In code, we grab the configuration from the environment using code like:

When developing with Azure Functions locally, we use the local.settings.json configuration file to define the environment variables for us.

This file isn’t checked in, we use it to set properties which should only be used locally.

Azure Functions will populate process.env with the contents of the Values property of the JSON file when running locally.

An important caveat here is that the environment variables are only set by the time the index function is called not when the script is parsed.

This means you cannot simply use process.env["TWITTER_CONSUMER_KEY"]; anywhere in your file, process.env will only be guaranteed to be set when calling the index function, like so:

To configure the environment variables in production, we need to head to our Azure Function app and set them one at a time in the application settings page.

This manual effort can be tedious so to speed things up we can also publish the environment variables in local settings up to production using the Azure Function CLI tool and this command line:

All the code for Mojifier is available on GitHub here.

This article isn’t a step by step guide for how to create your own mojifier app but instead intended to give you an overview of the architecture and an understanding of the different services used and design decisions made.

For next steps I recommend for you to play around with the project on GitHub, feel free to leave comments on the article, open issues in the repo, or submit pull requests with fixes and new features.

Also try out these quickstarts on Azure for Logic Apps and Functions:

This tutorial first appear on the code craft blog.